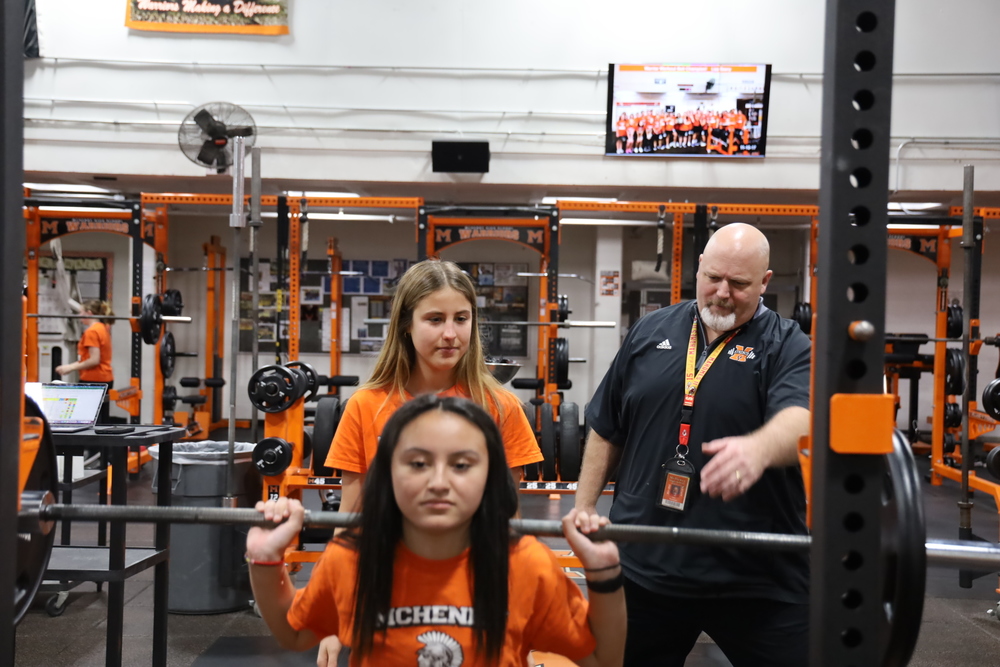 Staff Member of the Month: Beerbower lifts hearts and minds in the strength program

Thanks to growing up on a farm, Dr. John Beerbower is used to doing some heavy lifting.

Now his lifting is different, but still important, both inside and outside of his McHenry Strength weight room.

His focus on building strength in his students – physical, mental and social – earned Beerbower, director of McHenry Strength, the Staff Member of the Month Award for March.

Nominations for the award note Beerbower’s efforts to connect with students and help them get better in every way.

“Coach has had an immensely positive impact on both my kids, one of which has graduated and the other one is a senior. We appreciate the time he spends making connections with kids and being a positive role model. He’s a great teacher and a great guy,” MCHS parent Tom Harrison said.

Junior Brian Wacaser agreed, “He is very helpful in Strength and Conditioning and really cares about his students.”

For Beerbower, it is all part of a job he considers the best. In addition to running the strength and conditioning program for students and student-athletes, Beerbower is assistant chair for health, physical education and driver education. He also runs the Powerlifting Club.

“This role is a tremendous platform,” Beerbower said. “It’s all about relationships. It’s not just me with the students. I want them to connect with each other.”

Besides teaching students proper form and technique in the weight room, Beerbower uses technology to measure improvement and keeps records to show the positive correlation between physical fitness and academic success. He’s been an active proponent for physical education and he’s been recognized by the National High School Strength Coaches Association, including recently being named a Program of Excellence, and invited to speak by Teambuildr and Illinois Digital Educators Alliance (IDEA) and more.

“When they’re up here (the weight room), they should feel like they’re getting better,” he said.

Working with students continues to inspire him, but he credits support from his colleagues and school administrators for his success. And, he also credits early mentors, such as his own coaches and teachers.

He was born in Fort Scott, Kansas then moved with his family to central Illinois where his father serves as pastor in a rural community. After graduating from Casey-Westfield High School, Beerbower went on to earn bachelor’s and master’s degrees in physical education at Eastern Illinois University. One of his mentors was Mark Ramsey, physical education teacher and football coach at Central A&M and now St. Teresa in Decatur.

When teaching opportunities opened up north, he and his wife, also a teacher at Grayslake Central, relocated. Beerbower has been at McHenry since 2003. He has an Ed.D. doctorate degree in educational leadership from Concordia University Chicago.

To see the video announcing his award, click here.

The Staff Member of the Month program recognizes MCHS staff members who go above and beyond for the benefit of students. Thanks to the support from Meat and Potato Eatery and Brunch Cafe, each monthly winner receives a gift certificate as well as a plaque.