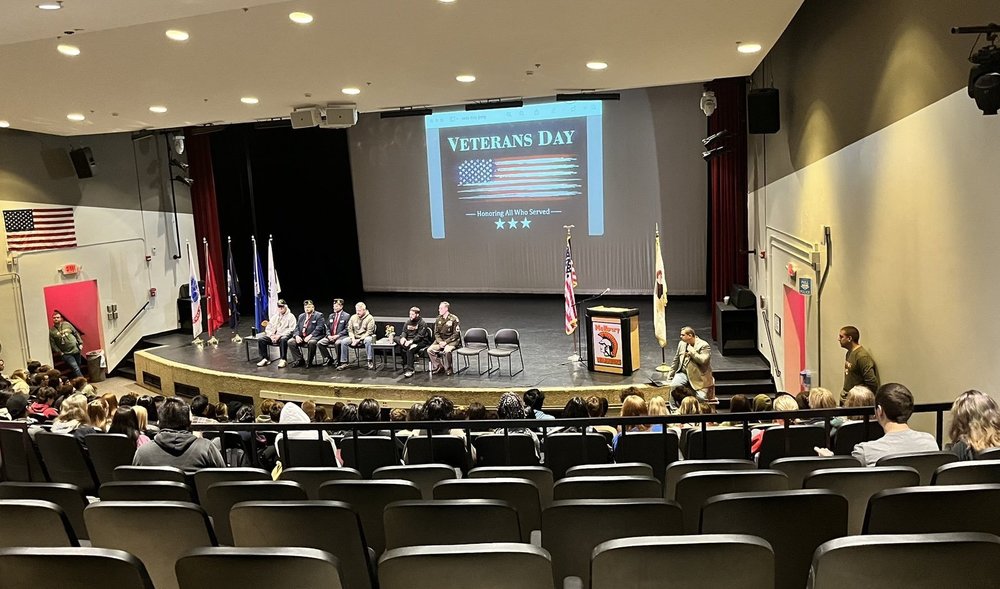 Veterans who served the country near and far recounted their experiences for McHenry Community High School students as part of the annual Veterans Day programs on Friday at both the Freshman and Upper campuses.

Panel discussions at both buildings feature veterans from Afghanistan, Iraq, Vietnam and more who shared their stories and took questions from students. The panel discussions went on all day for social science classes in the Upper Campus Auditorium and the Freshman Campus Theater.

Since school is in session for Veterans Day, McHenry High School teachers work to make it a memorable learning experience for students. In addition to the real-life discussions with veterans, students watch video clips of service members in action and have discussions in classrooms.

See the list below for more details about our veterans. 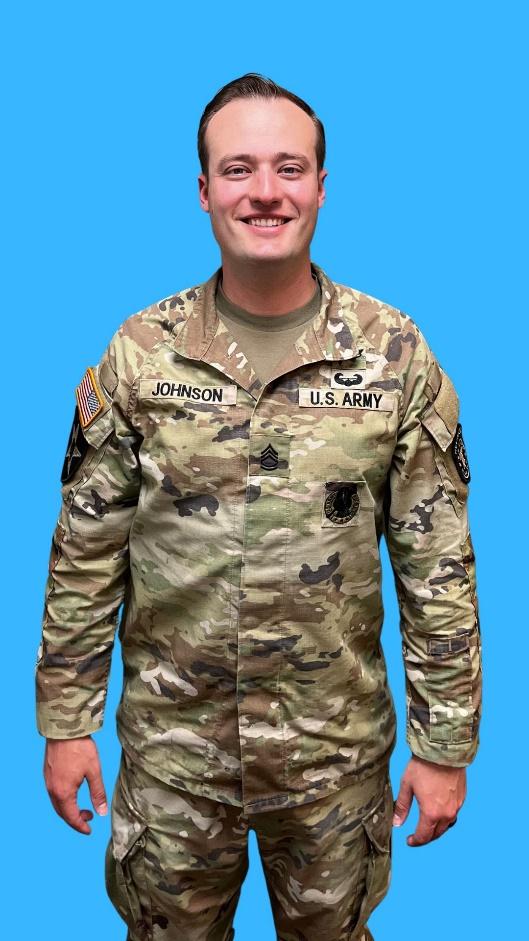 My name is Sergeant First Class Derek Johnson.  I joined the United States Army in July 2010 as an Infantryman.  I attended One Station Unit Training at Fort Benning, Georgia.

My first assignment was Joint Base Lewis-McChord to B Co. 2nd Battalion 3rd Infantry Regiment. I was assigned as a Team Leader as a Private First Class.

In 2011, I deployed with 2-3 INF to Afghanistan in support of Operation Enduring Freedom.  I was attached to 7th Special Forces Group to support the Village Stability Operations Mission. While forward, I cross-trained with all Special Forces Military Occupational Specialties.

Upon return to JBLM, I attended the Warrior Leaders Course, graduating on the Commandant’s List. I was handpicked by my 1SG to train the Battalion on the Remote Weapons System for the Stryker in the spring of 2013.

In 2014, I moved to Fort Campbell.  Upon arrival to my company, I attended and graduated the Air Assault Course. In April 2014, I was selected to be an Instructor at the Sabalauski Air Assault School (TSAAS). I attended and graduated the Army Basic Instructor Course in 2015.  During my time at TSAAS, I was assigned as the Assistant Chief of Operations.

In 2017, I was Selected by the Department of the Army to be a recruiter where I was assigned to the Norwich Recruiting Center within the New Haven Recruiting Company. I achieved the Top Recruiter award in January 2021. In February 2021, I relocated to the Crystal Lake Army Recruiting Station, I enlisted in 2010 from this same station.

My name is Ray Hagerty and I graduated from McHenry High School (West Campus) in 2000. I left for basic training one month after graduating. I completed basic training as well as Infantry training at Sand Hill in Fort Benning, Georgia. Immediately after completing Infantry training, I completed Airborne school, again at Fort Benning, Georgia. I served the majority of my time in the Army with the 101st Airborne Division, 3/187th Infantry Regiment in Fort Campbell, Kentucky. While stationed at Fort Campbell I completed Air Assault school prior to the attacks on 9/11. I watched the towers fall with my unit, and a couple of months after the attacks my brothers and I in the 187th Infantry Regiment ended up being the first Army Infantry unit to put boots on the ground in Afghanistan.

I was drafted into the Army in January, 1970.   Basic Ft Campbell Ky.  Advanced training Ft Polk La.   Completed 26 weeks of scout dog training at Ft. Benning, Ga.   Sent to Vietnam in Feb of 1971.  Assigned to the 101st Airborne Division at Camp Eagle in the far northern part of Vietnam.  Left the service in November 1971 to attend college.

My name is Christopher Fisco, and I graduated from McHenry East Campus in June 2006. I entered the military in August 2006. I was stationed at Fort Campbell, KY as a Combat Infantryman and deployed to Iraq from October 2007 to November 2008. I got out of the military on January 26, 2010.

My name is James wautelet I was a Sergeant first class in United States army. I was with fifth group special forces station on fort Campbell Kentucky. I served from 1986 to 2006. I am retired medically disabled retired. Served and desert Storm, the battle of Mogadishu, Djibouti Africa, Haiti, Bosnia. I'm also starting motivational speaking so if there's any spots open for that also I would love to come in and sit and talk with you first and then definitely talk the high school students thank you for your time

He took aerospace science classes through ROTC in college and was commissioned as a Second Lieutenant the same day that he graduated from the University of Iowa with his bachelor's degree.  He went on active duty a month later and was stationed at a strategic air command base in Michigan.

He was assigned as a personnel officer in the 379th Combat Support Group, which supported a nuclear-equipped B52 bomber squadron and a KC135 air refueling tanker squadron during the Cold War (while also shuttling those air crews on a rotating basis to bases in Thailand to fly bombing missions over North Vietnam).

Captain Phelps served an additional eight years in the Air Force Reserves before resigning his commission and receiving an honorable discharge.

My name is Abraham Hernandez and I am currently a captain serving in the Illinois Army National Guard.  I started as an enlisted soldier as a combat medic and am currently a medical officer and commander for the 709th MCAS company.

I was born in Mexico and always saw myself as a soldier in the U.S. Army.  I can proudly say that I have been serving this country for the past 12 years.  One of my missions in life is to help people and give back to the country that has given me so much, which is why I'm not only in the military, but also an elementary school bilingual teacher.

I have always been a Chicago-area resident, currently residing in Lakewood. After high school and community college, I was drafted into the U.S. Army in August 1969. I completed basic training was at Fort Benning, Georgia.  During the 10 weeks at Ft. Benning, everyone was trained and tested as was expected.  Included was an aptitude test that highlighted my mechanical ability. After basic training, I was sent to Fort Eustis in Virginia Beach,  VA for training on Chinook CH-47 helicopters.  While at Ft. Eustis, they enrolled me in a leadership class which extended my stay in Virginia.

After the training in Virginia I was sent back to Fort Benning at the Lawson Army airfield for some OJT (on the job training). Now being fully trained with a MOS of 67U20 (CH47 Helicopter Repairer) my next stop was Vietnam.

In country assignment was with The 1st Air Cavalry Division.  The Cav was an airmobile unit organized to be able to pick up and move the entire unit as needed.  The Cav had 3 Chinook companies (A, B, & C) each with 16 Chinooks.  I was in A Company 228th ASHC at Bearcat Base.  These were the workhorses of the Cav.

I have been married to my wife for 51 years.  We have 2 grown daughters, one of whom teaches English at this high school.  Her name is Mrs. Goy.

I was born in Germany after WWII. My parents were Latvian and fleeing from Russian occupation. History seems to repeat the same scenarios. (Example: Ukraine today.)

I grew up in Aurora, Illinois and attended East High School. Graduated 1965. Graduated from Western Illinois University in June 1969 and I was drafted into the U.S. Army in August 1969.