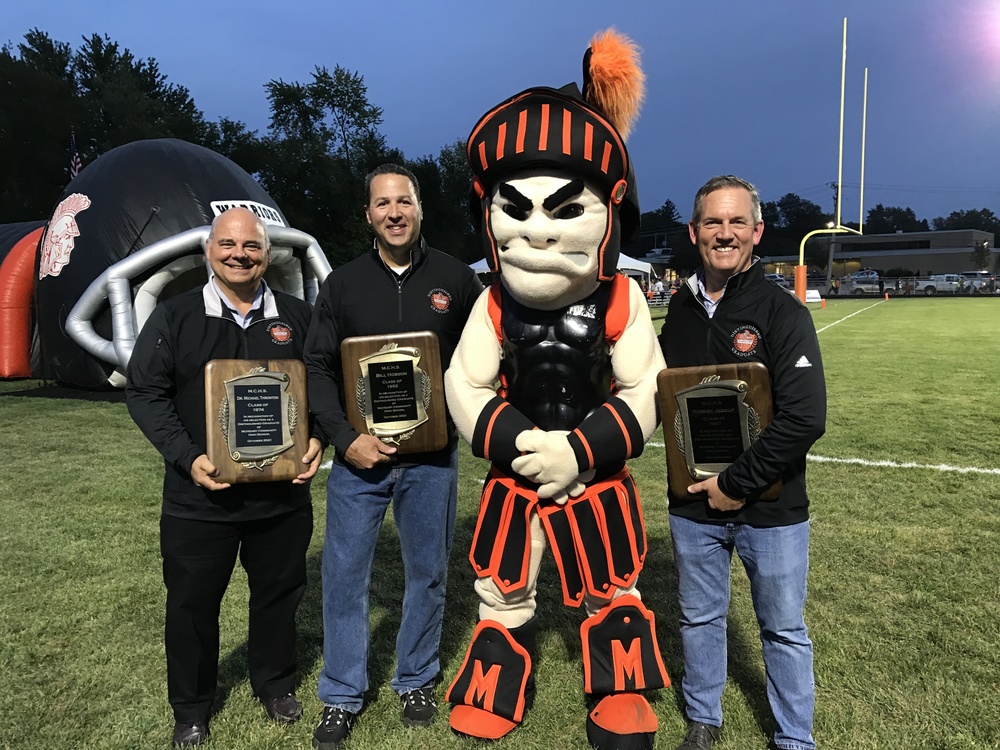 As part of the annual homecoming tradition at McHenry High School, three graduates were honored Oct. 1 as Distinguished Graduates for their contributions to their profession and larger community.

All three received plaques and were honored during the Friday homecoming football game at McCracken Field in McHenry. They were also honored during a special MCHS Alumni Association event to celebrate the new alumni association.

“We’re pleased to add these three Distinguished Graduates to our long list of McHenry High School graduates who have excelled in their careers and service to their communities,” said Carl Vallianatos, assistant superintendent for learning and innovation for McHenry Community High School District 156.

“We are very proud of their accomplishments.”

Bill Hobson graduated from the former West Campus in 1992 and went on to Northern Illinois University. In his professional career in McHenry, he has served as assistant city administrator and director of parks and recreation, and he helped plan and develop the McHenry Recreation Center and the McHenry Riverwalk. Hobson has spent many hours, both for his career and as a volunteer, helping with community events and service organizations.

Dr. Michael Thornton graduated from the former West Campus in 1974, and went on to receive a bachelor’s degree in biology from Wheaton College. He earned his medical degree from the University of Illinois in 1982. As a medical doctor, Thornton worked as a family practice physician in Sycamore, Illinois, and served as a medical director for the DeKalb County Hospital as well as the DeKalb County Health Department, and the chief of staff of Kishwaukee Hospital in 1997. He was the 2010 recipient of the Acclaimed Physician Award from the Kishwaukee Health System. He has been on numerous mission trips to provide medical care in other parts of the world and volunteered as the sideline doctor for Sycamore High School for 29 years. He’s delivered more than 800 babies in the DeKalb/Sycamore area.

Robert A. Jessup graduated from the former East Campus in 1987 and studied business at Valparaiso University. Jessup joined the family business, Jessup Manufacturing, in 1993. He bought the company in 2001 and under his leadership, the company grew from its humble beginnings with one employee in 1956 to more than 115 employees in 195,000 square feet of manufacturing space. Once the maker of welts and bindings for leather gloves, Jessup has now become a global manufacturer, specializing in adhesive coated films. In addition, the company stresses the importance of community service with Rob Jessup serving on a variety of professional organizations and community development groups.