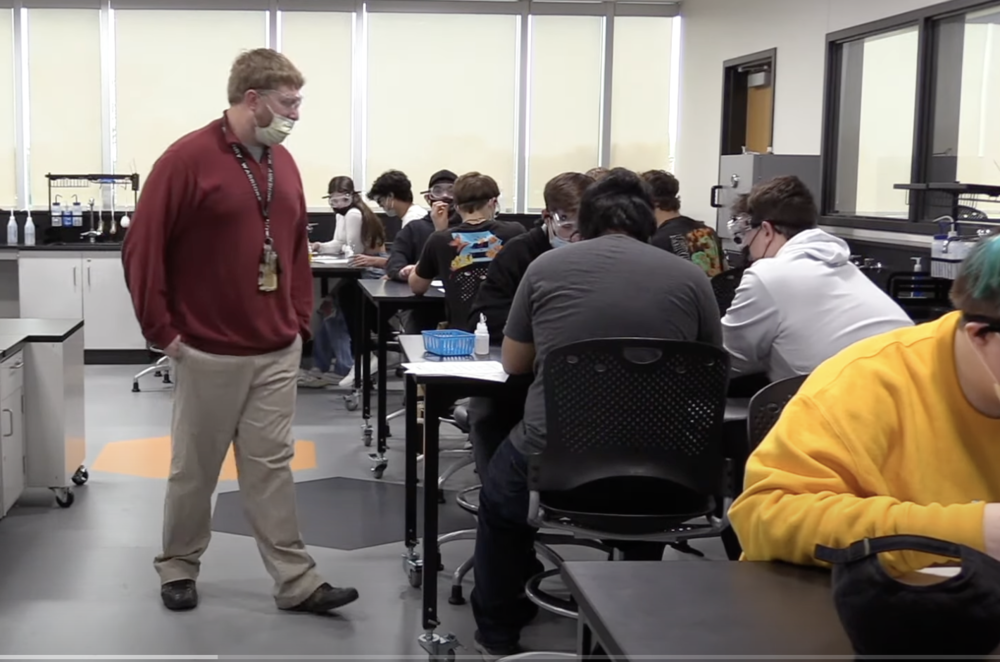 Creating lightning in a bottle, making a flame change color and blowing up a pumpkin are just some of the ways McHenry High School chemistry Instructor Derek Poci engages his students.

His favorite challenge is changing the minds of students who may not think they are good at science.

“I like seeing the moment when they get it,” said Poci, who has been teaching in McHenry since 2016. Poci’s ability to make science enjoyable was mentioned by the several students who nominated him for Staff Member of the Month -- an honor Poci earned for October.

Not only does he offer great explanations about science, but he helps students with anything, his students said.

“I’ve never really liked my science classes before, until this year,” said sophomore Rian Wasniewski. “Not only does Mr. Poci make it easy for me to understand what’s happening, he takes the time to explain things in a different way if I don’t.”

Poci said he realizes chemistry can be tough and it helps to do hands-on experiments testing different chemical reactions. He added, “It’s a little easier to engage kids when you can blow things up.”

When he was in high school himself, Poci did not know what he wanted to do for a career. The Rock Falls, Illinois native didn’t discover his interest in teaching until he was tutoring other students in science while at Southern Illinois University - Edwardsville. After shifting gears, he got a bachelor’s degree in science education followed by a master’s degree in chemistry.

He went to work at Marian Central in Woodstock and was mentored by a 40-year science teacher before coming to McHenry in 2016.

Poci, who also teaches part-time at McHenry County College, said he enjoys when students ask him about a science video they found on the internet so he can explain why certain things happen. Click on this link to see Mr. Poci demonstrating experiments with pumpkins before Halloween.

The Staff Member of the Month program recognizes MCHS staff members who go above and beyond for the benefit of students. Thanks to the support from Meat and Potato Eatery and Brunch Cafe, each monthly winner receives a gift certificate as well as a plaque.